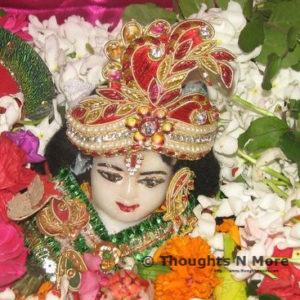 Janmashtami : A festival celebrated in most parts of India to mark the birth of Lord Shree Krishna who is considered to be the  eighth incarnation of Lord Vishnu.

Janam/Janm जन्म meaning Birth, Ashtami-अष्टमी  meaning Eighth day (of Bhadrapad), On this day Lord Krishna was born to Vasudeva and Devaki, who were kept captive in a prison cell by Kans (Sanskrit:कंस- The ruler of Vrishni kingdom) in the city of Mathura. Krishna was born in the midnight and vasudev had to securely take Krishna away to his forster parents (baba Nand and Maa Yashoda). Its believed that Krishna was escaped miraculously as all the guards fell asleep at the time of his birth. The chains that Vasudev and Devaki were tied to were broken and the barred doors gently opened hence Krishna was safely escaped and grew up Gokul. Later on Krishna imparted knowledge of Bhagvad Gita to Arjun during the battle between Kaurav and Pandav as mentioned in the epic Mahabharat.

I might describe about Bhagvadgita someother time, but coming back to Janmashtami, I had read a beautiful interpretation of Janmashtami which I am sharing here . Analogy of this festival is that as soon as Krishna (The chetna – चेतना or awareness) takes birth in our mind , all the darkness अंधकार -negativity fades away just like when Krishna was born the whole prison was lit . All the chains जंजीर – Ego (I , me, myself) are broken away, and all the doors of prison-काल कोठरी  -thoughts or opinions that we are confined in- of caste, religion, relation etc) are opened up.

The idea or essence of the festival lies in self awakening so as you can get away from all the negativitiess and understand the true essence of blessing the LIFE is.